From the woods, farms and beaches to my plate. This is about real food, plain and simple.

Winter Foraging in the Pacific Northwest

Winter in Vancouver this year has been mild and forgiving, so much so that I have arugula and red mustard flowering in my garden. Largely due to the drier than average fall and warm temperatures that we have been enjoying the mushroom harvesting period has been extended and I have been picking loads of late fall oyster mushrooms in Stanley Park on a regular basis, the dark capped variety tends to ‘flush’ later in the season and tolerates freezing and thawing temperatures without going slimy.

Most recently I went for a misty morning walk with my partner(s) in foraging and local food rackets, Chashma and Judy. Keeping us company on our stroll through the misty forests of Lighthouse park was the house dog, Zeus, who made sure that we didn’t get separated in the exciting rush of searching for mushrooms. We didn’t even bring our identification books or forging equipment, planning to just enjoy the walk.

Right of the bat we find baby dock leaves growing in the long grasses at the edge of the parking lot, and a small handful of pale grey oyster mushrooms that were hiding in the nooks created by a hungry woodpecker in the dead wood of a standing conifer. As we meandered our way though the trails in the Park, we found some chicory and incredibly delicate siberian miner’s lettuce (clatonia siberica),

noting the spot to return to in the spring. Just as I was beginning to give up on finding that perfect patch of edible mushrooms, I stumbled onto some Craterellus tubaeformis, also known as yellowfoot chanterelle or flame coloured chanterelle. Easily distinguisable by the hollow stem and navel like depression in the center of the cap, these are a delicious variety that flushes late in the winter and through the early spring, and there are no dopleganger mushrooms that I know of to confuse you.

When wild harvesting any living thing, you need to value the continued health and productivity of the ecosystem over any harvested commodities you might take home. Mushrooms, being the blooming fruit of an underground mycelial community, can be compared to the fruit on any plant, picking it does not harm the plant though it does remove spores(seed) from the environment. In terms of greens and flowers, harvesting one leaf or trimming the plant selectively is the best practice, that way you maintain the quality and health of the ecosystem and don’t remove whole plants. In addition, foraging is not permitted in most parks, check your local park information as they can ticket you, primarily due to the potentially damaging impact of the activity. This is the inherent contradiction in foraging, how to preserve and maintain the forests and natural ecosystems while harvesting enough to feed yourself. If hundreds of people were to decide to tramp about in the woods looking for mushrooms, the damage to the biological communities would be substantial, smashed mossy hillocks and damaged baby fern colonies, humans as a species have a big footprint. I recently led a series of wild mushroom and plant identification tours in Lynn Headwaters Park, and even though we had permission from Parks and we were following bylaws, I was conscious of each time a tour participant destabilized a slope trying to climb up or trampled a mushroom without even seeing it, or sat on a fern by mistake. I feel like as a culture we take our parks and natural spaces for granted, both Lynn and Lighthouse are typically filled with doggie land mines , and I have on more than one occasion picked up burning cigarette buts or caught people breaking whole huckleberry bushes to carry with them to eat as they walked along the trails, dropping trash here and there like it was no big thing. The pitfalls of heavily traveled areas for foraging are pretty evident, though I did snag a handful of orange chanterelles earlier in the year in Central Park, where there are encampments and trash piles and all sorts of humans and geese defecating all over the place. Use your own judgement to determine if something is safe to harvest, think about the ability of whatever you are harvesting to uptake toxins; many marshland or beach plants, as well as mushrooms, will hyper accumulate toxins if the environment is contaminated. I won’t touch the sea asparagus that grows in false creek, though I am sure it wouldn’t kill me I don’t like the contaminants that are leeching from the site to be in my food. As an urban forager you must also be highly aware of the evidence of pesticide application on a site, railway tracks are a classic example, and you often see folks picking blackberries along the sides during the summer. The evidence ( if you miss the sign that the landowner is obligated to put up) is in the wilted, withered and eventually crispy weeds and blackberry leaves. Even though they don’t typically spray in midsummer  (evaporates too fast, usually in spring when cooler), I wouldn’t trust the fruit of a plant that has its roots in groundwater that received regular infusions of herbicides. Check with the city if you are unsure, they will often have a permitting department that will have records of spraying applications, but in the end in most situations after all the research you simply have to use your own best judgement.

As I harvested the delicate little button mushrooms that had popped up throughout the woods, finding more over in the mossy and damp hollows of each subsequent rocky outcrop, a family out for a stroll stopped to chat with me. The mother, fearful of the mushrooms I was salivating over, told me a story about a mushroom poisoning incident that resulted in the death of a woman. Mushrooms are not to be feared, rather they should be respected as the ancient organisms they are, maintaining their air of mystery even in the face of modern science. If you were to ask Paul Stamets, he would tell you mushrooms can save the world. It is only when ignorance and a lack of respect are combined that the danger arises, like running out and eating the first/any mushroom you find hoping to get high, the rule of thumb is when in doubt, chuck it out. To eat a wild mushroom, you must be intimately familiar with the subtle biogeographic variations in color and growing habits, a process that takes many visits into the forest or walks through the fields.

Tomorrow evening we will be cooking up the harvest, there is talk of a batch of freshly made pasta, a perfect complement to the woodsy deliciousness of the wild mushrooms. While I enjoy the foraging part of the process, the shared joy of eating together is the greatest pleasure for me, I think someone pinned my lapel with a ‘eat together’ pin a while back saying it struck them as only appropriate given how many times we had shared a meal together. The food scene turns around a few key folks, lately those living in the little yellow house on Mclean and 8th. Tomorrow is the mushroom showdown and fresh pasta will no doubt rally to the cause, and the house will be full of good smells and old friends that will have come to share in the midwinter feast. 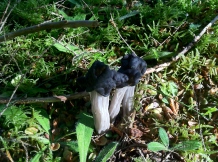 Helvella lacunosa: Fluted Black Elven Saddles. Regarded as edible by most experts, these mushrooms must be cooked to avoid any gastro-intestinal distress as they contain ( or may contain ) toxic compounds. 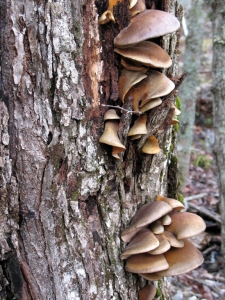 Panellus serotinas: Late Fall, Dark Capped Oyster. Though sometimes bitter or tough, this is a welcome treat in midwinter for any mushroom lover

Pleurocybella porrigens: Angel Wings. Delicate, flower petal like mushrooms that are tender and delicious, widespread in the Pacific Northwest

Craterellus tubaeformis: Winter Chanterelle, Yellow Foot Chanterelle. This is one of the best winter mushrooms, with delicious earthy flavour and nice chewy texture. Look for the hollow stem, yellow foot and chaterelle-like gills that partially run down the stem